Home > Beauty Remedies > Mouth Remedies
When you buy through our links, we may earn an affiliate commission. As an Amazon Associate we earn from qualifying purchases. Learn more.

Did you know receding gums are the first sign of gum disease? When the gums recede, space is opened up and bacteria fill that void and wreak havoc on your dental health. While there a lot of reasons gums begin to recede, from poor dental health to aggressive brushing, there are a number of all natural ways to control the deterioration of your gums.

Green Tea has been shown to reduce the inflammation of the gums and fight against bacteria trying to get into the spaces in your mouth. Drinking a single cup of green tea every morning will keep teeth strong and the gums healthy.

Using 1/4 cup of Sesame Oil like mouthwash will remove a number of toxic substances from your mouth. The oil also puts a protective coating around the teeth and gums, essentially keeping them free from dental and gum decay all day long.

Using Aloe Vera like toothpaste will help fight gum disease. While it helps with healing gum disease, it can also be used to prevent gum disease. Simply brush your teeth like you would normally but with aloe vera instead of toothpaste. 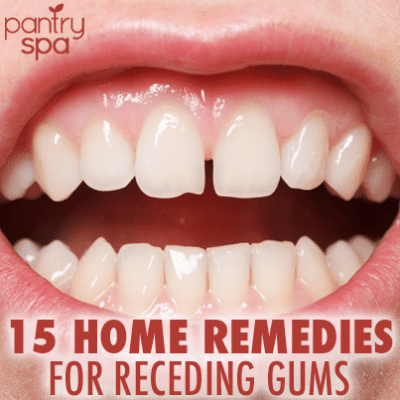 Receding gums are the first sign of gum disease which means taking good care of your gums is important. Here are some natural remedies for receding gums.

You can also use Coconut Oil as a mouthwash to wash away any toxins in the mouth. It can used everyday as a way to prevent bacteria from getting lodged in the gums.

Infusing lemons with olive oil is a the best way to make lemon oil, and then the oil can be placed on the teeth to prevent receding gums. Don’t do it every single day, though. The lemon will corrode the teeth if it is used daily.

Dilute Eucalyptus Oil with a small amount of water and then apply it right onto the gums. Simply massage it onto the gums for a few minutes before rinsing it off with water. This stimulates new tissue growth and reduce receding gums.

One of the best products to use against all types of dental health problems are cloves. Clove Oil is known to be a natural antiseptic, antimicrobial and an antifungal agent, which has been shown to help in the growth of tissue and the repair of tissue. Massage the guns with clove oil every day for the best results.

Myrrh has been shown to stop receding gums and has also been praised for its ability to strengthen the gums. It can be used as a mouthwash or as a toothpaste if you find it in powder form.

Using Tea Tree Oil as a mouthwash has been shown to prevent gum recession and root damage. Be cautious when using it, though. Tea tree oil is very strong and if it is not diluted, it can burn your mouth when used as a mouthwash.

Another great product is sumac tree, which has been shown to stimulate the growth of gums while also cleaning the teeth.

Rubbing wild yarrow on your teeth has been shown to prevent receding gums. Simply rub it on your teeth and let it sit for a few minutes before rinsing.

When sage leaves are rubbed on the gums, they have been shown be an excellent oral care treatment. If you would rather drink the sage leaves, place them in boiling water and steep for ten minutes before sipping on the drink.

Rose Vinegar has been shown to stop receding gums as well. Simply add the vinegar to a cup of warm water and then use it as a mouthwash.

Drinking about a teaspoon of Cod Liver Oil has been shown to stop cavities as well as fight against receding gums.