Home > Health Remedies > Body Remedies
When you buy through our links, we may earn an affiliate commission. As an Amazon Associate we earn from qualifying purchases. Learn more.

Have you ever heard people say they don’t want to wear deodorant because of the aluminum in the deodorant? They are right that deodorant normally has aluminum in it, along with other strange chemicals like parabens, triclosan, talc and silica. I don’t know about you but I would not want to put anything like that under my armpits when I don’t even know what those ingredients are.

Basically, what it comes down to is those ingredients are not natural but they are being absorbed into our bodies when we apply them to our skin.

Many people have started turning to antiperspirants, but those can also be harmful to your body. Instead of allowing your body to do what it would naturally do when you’re hot, sweat, it blocks this all natural function from happening.

Many people may agree that the points above are valid reasons to switch to all natural, homemade deodorant, but the cost may be a bit off putting. Initially, the homemade deodorant is more expensive. The materials cost about $15, but all the ingredients for the recipe below will last for a long time, meaning you are buying less deodorant over a longer period of time. 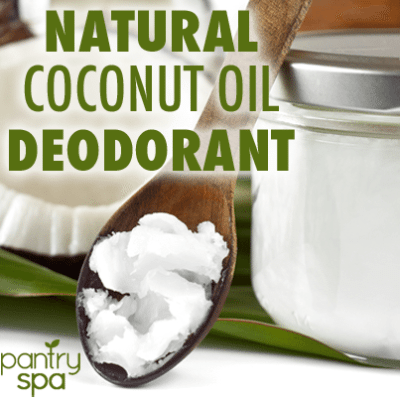 Sticks of deodorant contain a lot of ingredients you should not be putting on your body, but there are homemade deodorants, like this coconut oil deodorant.

You can start will lesser amounts of the ingredients but this recipe will yield you enough for a large batch of deodorant.

The deodorant needs to be kept in a dark closet or in a fridge because at 75 degrees, the coconut oil will start to melt. Also, don’t rub the deodorant on. Simply blot it on your skin. If you have sensitive skin and the product burns a little bit, use less baking soda in your next batch.